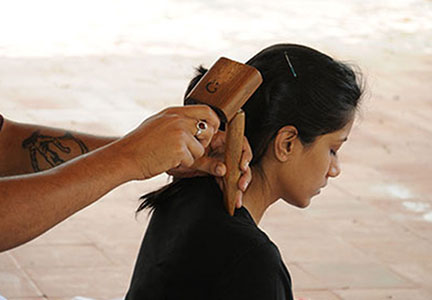 The first use of Toksen as a healing arts dates back to farmers of northern Thailand, and it is believed by some to date back to 3000 BCE. The tradition talks about how farmers who were exhausted after a hard day’s work used to revive each other by gently tapping a wooden wedge using a wooden mallet along the energy lines (Sen). The wood was originally supposed to be derived from the remains of a lightning struck tree that was later blessed by Buddhist monks, thus enabling the wood to retain the power of lightning and thus help revitalise the human body through Toksen. Today, the official Toksen wedges and mallets are made from tamarind wood, rosewood and teak, which have been found to be efficacious for the practice of Toksen.

The name Toksen combines the sound of the knock of the mallet on the wedge and the word for energy lines Sen and is a method used to open up blocked energy lines by the tapping action.

The mode of action of Toksen is simple – the tapping action triggers vibrations at the muscles and nerve endings that permeate the entire body of the receiver. These vibrations cause resonance, that is similar to the sound of a bell, which in turn unblocks the stifled energy lines and eases the flow along the Sen.

It is the resonance that relieves pain and revitalises the body. It does not sound like much until you experience it. One receiver wrote that while it seemed little more than a tap when he saw a giver perform Toksen on another, when it was his turn, each tap resounded like a big bell within, with vibrations radiating through the flesh and bone, resonating like a opera hall.

This kind of experience is but common for those receiving Toksen for the first time, and is very intense, though not painful. It is recommended that Toksen be performed along with Thai Yoga Bodywork for significantly improved convalescence and pain relief.

Toksen offers immense benefits to the receiver when it comes to healing and convalescence.